About the C.A.S.A. Social Club

CASA was founded over 40 years' ago in the late 1970's so that expatriates to the Algarve could get together on an informal social basis. The basis of the group was a monthly dinner which was often followed by performances by some of the members who had acting talents.   In time the group became over-large for the local venue so the group split - those more interested in the performance aspect  went on to form the well known Algarvean's amateur theatrical group in the early 1980's, some people are still active in both associations. The club has changed much in subsequent years as both the Algarve itself and the ex-pat community have evolved.

Although originally formed in the small coastal town of Carvoeiro (hence the name - Carvoeiro Association for Social Ativities) we are now more diverse with membership across the entire West-Central area of the Algarve as represented by the map below.

The red dots show the locations of our events held since 2015.

The yellow dots show the approximate locations (approximate post code area only) of the homes of the members, committee members shown in green. 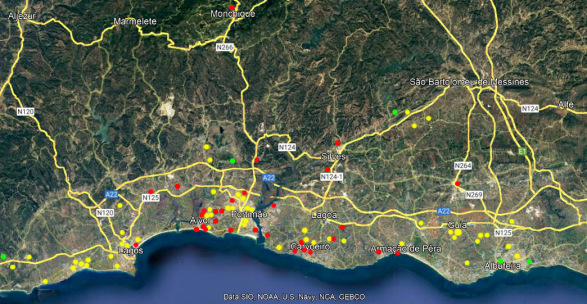 CASA members generally meet once a month for a meal at a suitable hostelry, most years we also have a trip away - usually by coach to either Northern Portugal or Southern Spain.  Many years we hold a car treasure hunt or aim to have an 'away day' trip to somewhere interesting. We publish a monthly Newsletter for our members, most of whom receive this via e-mail but we also post paper copies for those who prefer this.

All events are open to non-members, generally at a small surcharge. During the pandemic all events were 'members only'.

Although primarily a social club we try to assist local charitable organisations and make donations when possible to organisations suggested by members. The Bombieros (B.V.) are a frequent beneficiary, receiving 1000 Euro in 2014, 1500 Euro in 2016 and 1000 Euro in 2021. We raise some money for charity in the form of required equipment and we have given items to the Bombeiros, several children's homes, old peoples' homes and various other local Portuguese groups which are desperate for funds. More details about recent donations will be found on the 'Latest News' page.

Membership is open to both singles and couples of any nationality - though all events and information are in English only. Current membership is somewhat over 100 people.

CASA is not only for resident expatriates, it also has a number of members who live overseas and stay in the Algarve for just few months each year.

The annual membership fee is €10 per person and runs from January to December.

The club is run by an elected committee of unpaid volunteers. An annual A.G.M. and dinner (usually held in early March) gives the members a chance to elect a new committee and make vocal suggestions.

Any queries or concerns?

We are based in the West-Central Algarve of Portugal.

If you have any queries or wish to become a member please contact us by e-mail.

Get social with us.